‘My life after Nelson Mandela’: An interview with his former aide, Zelda la Grange

Today, 18 July is International Nelson Mandela day. A day that invites us to follow in the footsteps of Nelson Mandela who has fought for social justice for 67 years, to start with 67 minutes volunteering or community service to fight poverty and promote peace, reconciliation and cultural diversity.

Zelda la Grange was raised as a daughter of white apartheid. She would become President Nelson Mandela’s most trusted and loyal assistant after she started working in the presidential office in 1994.

Brussels-based Speaker Coach Elizabeth Van Den Bergh had the honor to help Zelda la Grange prepare her TED Talk for TEDxFlanders 2019. The day after they found time for coffee and a talk.

I was nervous for our first skype call. In the first few minutes of my online meeting with Zelda la Grange, I was presenting myself she said ‘Elizabeth, I think you are selling yourself short’ and smiled. The ice was broken and we had a fruitful talk about what she would say in her Ted Talk about Nelson Mandela’s legacy. Only two hours after our first Skype call I already received a first draft of her Talk in my mailbox. Zelda la Grange is that kind of person: warm, kind and committed.

After having been so close to Madiba for 19 years, how did you deal with his passing?

Writing the book Goodmorning Mr. Mandela was cathartic. Madiba (a title of respect for Nelson Mandela, deriving from his Xhosa clan name) is still very present in my life because I talk about him every day and that helps.

It is almost 6 years since he passed away. I have not really taken two months off to mourn and process what has happened to me. I haven’t had the time to sit and think about it. I prefer it this way because otherwise I could have become conceited.

Working alongside Madiba with everybody from Bono, to President Clinton and everybody who felt they needed some of his time and a photograph alongside him, must have been so intense. After 19 years of working at times day and night, what kind of life did you see for yourself and what actually happened?

Haha, good question. At some point I just longed for a quieter life and was thinking of opening a florist shop, but things turned out quite differently!

People ask me ‘Zelda, do you have a five year plan? I don’t!’

Looking back at my life, I did not have the ambition to become so close to Madiba.

I believe my life purpose is revelations.

I am revealing the person that I worked for. In doing so I am also pursuing my passion.

Looking back now, how did you end up working alongside one of the most famous presidents in human history?

At the age of 23 I didn’t want to be the office assistant, this rookie job. But I committed and became the manager. I am extremely hard-working, I simply get things done.

I don’t know why President Mandela picked me to be his personal assistant, but he did.

I am an all or nothing kind of person. If my heart is not in something I cannot engage and then I’d rather leave it. In my work with Nelson Mandela my level of commitment is what differentiated me. I was 110% in the job, you cannot ignore such commitment.

It is important to be in the moment and doing the best you can with what you have.

It’s really about becoming the best in your craft with dedication, loyalty and commitment, just like Nelson Mandela.

If I would have said ‘I can’t do all this by myself, being a personal assistant, being a spokesperson and being a crisis manager, I wouldn’t have gone through the wonderful rollercoaster I have.

I didn’t always like my job, but it gave me opportunities. And that’s the thing, we don’t always see opportunities. But I have learned do what you do with complete conviction then the next step will be a secure one.

But, I had such a privileged life. To be so close to someone like him.

I have an obligation. It is my way to show gratitude. Gratitude that I am paying forward by making people understand what Madiba’s work is all about.

How did you become a professional speaker?

My speaker career started in 2010, when we were cutting on Madiba’s public life because physically it was not possible for him anymore.

A friend of mine who works for the rugby association invited me to speak to the Sprinkbok national women’s team.

Not being used to public speaking. I actually I enjoyed it. And then more and more speaking engagements come from that.

In 2010 Madiba was still alive, but I stopped taking on speaking engagements 3 months before he passed away. There was a lot of admin work around his office and supporting his wife Graça Machel.

I didn’t plan that my book would come 6 months after his passing, but that’s what happened and then the speaking engagements picked up.

There was the desire to hear his story. I must say I was completely overwhelmed by the selling of the book. People asked how many books do you want to sell.

I have no idea about the sales numbers. The demand for it just didn’t stop.

I had other plans. Around publishing time I had plans to go to a more simple life.

Dealing with the politics around Nelson Mandela is exhausting. This was the moment I was determined to open a florist. But as you can tell, things turned out differently. 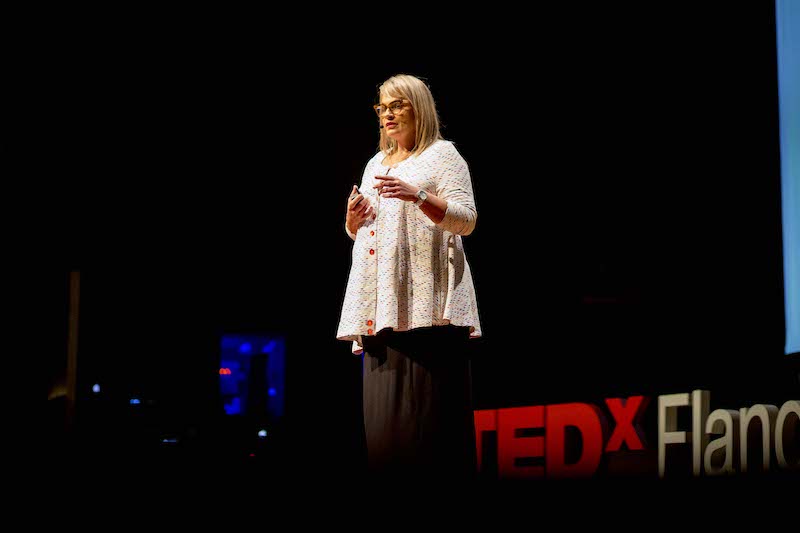 You are getting caught up in another roller coaster?

Yes! So many things have happened to me since the book and the passing.

I am getting involved in interesting things. I co-curated an exhibition in London.

There is a documentary in Afrikaans about the young life of Nelson Mandela.

8 years have gone by since he passed away and nothing has been done in terms of broadcasting. Nothing about the history and I am passionate about that.

I am involved in a weekly women’s talk show that I present in Afrikaans. I enjoy the variety of all these many things.

And then life enfolds itself?

Indeed, from all of these things the next opportunity will come. I believe the universe reveals itself in time. Whenever I want to stop I’ll meet someone who will inspire me, encourage me. To continue. I take it as a sign.

So, I don’t sit down and think I have a particular role to play. Or my voice is important.

I just do. And when I do, I do with complete conviction.

If it was in my nature to sit down and reflect I could have become conceited.

Like look at me, but I don’t. Even now I don’t have time to think, and that’s good. It goes to your head. I find satisfaction from doing.

How has Madiba’s way of being affected you?

The learnings from Mandela become part of ones nature.

I have adopted a different regard for other people. Mr. Nelson Mandela was a very mindful person by nature. Being mindful takes practice. It is so hard these days surviving in today’s fast moving world, you would easily forget to be mindful.

For example, when someone serves me at the restaurant, I make eye contact and connect with that other human being.

We live in our little silos and that’s why we have become so unaware of each other’s struggle. Many of us are just making it through the day. So if you look up at the person serving you, and say’ thank you very much are you having a good day’ you are making a difference in someone’s day.

Or, like in the supermarket, the person taking your money, I look at the name tag and say something kind. This is important for someone’s survival. Other people are human beings as well.

Nelson Mandela also taught me to think about people’s circumstances, specifically in the South African context.

It has to do with empathy. For example, you are driving your car and someone cuts into you. Despite of the tensions and road rage, I would not get angry because the person made a stupid mistake.

Not judging but asking why is this person behaving in a particular way. Realising that there may be a very good reason. That I would not understand because I am just in my moment dealing with my frustration. We are all so full of prejudices and that’s only human, but our challenge is to question our prejudice. I don’t reduce other people to their actions.

It will shock people but if I look at the most hardened murderer, I still feel empathy.

Nelson Mandela believes no one is beyond redemption. He would reach out to a murderer and say ‘you have made a mistake, you have to deal with the consequences, but it doesn’t mean we have written you off.‘

When you speak in public do you act or are you being yourself?

It is not about not being yourself it is about the delivery. I am very much at ease with one on one conversations, or talking in groups of friends. But as an introvert I find it challenging to speak to big crowds or strangers. On stage I bridge that for myself. It is out of character for me in that big room. That’s where the acting comes in. I dramatize in the delivery. And the storytelling behind it.

I wanted to be an actress growing up. I didn’t become one, but in my 19 years with Nelson Mandela I was surely given the opportunity to act. Being the frontperson for him requires acting and role play. I was not skilled but got to do it. In speaking it is also exactly that.

I use a lot of humor. Nelson Mandela also had a great sense of humor. I use that and it’s entertaining. I add both prepared and unprepared jokes.

When Madiba (Mandela’s clan name, editor’s note) met Queen Elizabeth, he first looked at her from the other side of the room. He had every intention to respect the protocol. But he also wanted to break the ice.

He took a long time to cross the room, and finally he said ‘Elizabeth. You lost weight!’ And she burst into laughter.

Ms. Machell, Madiba’s wife, quickly tried to correct him: ‘You cannot call her Elizabeth!’ ‘Why not?’ he replied, ‘She calls me Nelson’.

In any situation he could use his sense of humor to diffuse tension.

If you meet young people what do you tell them?

I believe things will happen as they should and that we should know that we are at the right place and right time.

So, I tell young people ‘Be present in the moment and do everything with complete conviction. Because we never realize which opportunity could come to us.’

And remember, ‘It always seem impossible until it’s done.’

Here is the link to the series on Nelson Mandela’s younger years, ’n Uitsonderlike Roeping.